History Of The First Baptist Church

First Baptist Church of Jersey City celebrated its 160th anniversary on Sunday, November 22, 1998. Formally organized by a group of thirteen baptized believers on November 27, 1838, the history of First Baptist is a shared history with many other Baptist churches in Jersey City. In essence, First Baptist might be perceived as the "mother" of several prestigious Baptist houses of worship in Jersey City.

It was in 1828 when James Howe, a member of the Baptist Church on Oliver Street, New York, moved to Jersey City and began holding prayer meetings. According to our documents, the first attempt to organize a Baptist Church in Jersey City, New Jersey was on August 24, 1838. It was "Resolved: that the Brethren Moore and Howe be a committee to confer with the ministries and other brethren of Baptist Churches in New York on the expediency of forming a Baptist Church in this place."

The date was November 27, 1838, when the First Baptist Church was organized. Thirteen charter members gathered in a small city of a settlement of about a thousand souls. As a young Church, it recognized the necessity of leadership and was willing to pay for it. Hence on this day they resolved: "That we engage the service of Reverend Joseph Houghmont, as our Pastor, for six months, that we give him four dollars per week."

The First Baptist Church of Jersey City and Harsimus

On March 11, 1839, a council met at the home of Mrs. Mary S. James, the widow of a deceased minister, who lived on Railroad Avenue, between Grove and Newark Street and recognized the Church as The First Baptist Church of Jersey City and Harsimus. The Church worshipped in private houses until a building on Barrow Street between Newark and Railroad Avenues was erected.

The Church grew from thirteen charter members to over 273 members with-in the first nine years of its history. These nine years were filled with much contention. Over half of the membership were foreign born with controversial ideas from the other half. A large portion of the membership was abolitionist while others were not sympathetic with them. The Church put on record "believing everything which has a tendency to cause contention and schism in the Church of God ought to be avoided."

With the controversy over slavery, The First Baptist Church was known as the Jersey City Baptist Church in the 1840's. The moderator at that time and the Church clerk wrote about their views:

"We believe that a slaveholder, or one who traffics in human beings, is not a fit member for a Gospel Church, and that it would be sinful for such a Church knowing to suffer one to sit down and commune with them . . . believing that the Bible enjoins us to be open and candid in all things, we therefore cannot consistently admit to fellowship any member of a Secret Society."

The early years were tense years as the First Baptist Church had formed three Churches in our city. On August 4, 1847, a conciliatory resolution was written:

"Resolved, that we have heard with deep regret of the step taken by our brethren in Harsimus, and we advise them to come together once more, and to meet us, and consult together, respecting the best means to be adopted.

"Resolved, "that Jersey City is ready to form a union of the Baptist Churches of this place when, the Grand Street Church is ready..."

At a general meeting on March 1, 1848, the following preamble was written:

Resolved "that everything of an unpleasant nature, or cause of grief, shall be, and is heartily forgiven, and shall never be referred to by us"

Resolved "that we proceed to organize a Baptist Church, to be called by a name not yet resolved on."

In 1844, Travis Haynes, who had been a faithful Pastor of Jersey City and Harsimus Church for two years, split the Church and formed the Grand Street Baptist Church.

Years of Search for Property

The years of 1838 to 1847 had resulted in the formation of three Baptist Churches in Jersey City, New Jersey. Unfortunately, none of the Churches had acquired any property. All had names, yet worshipped in rented halls. Early attempts had been made to build in 1847, but nothing came to fruition.

On June 19, 1850, a building committee was appointed: the building on Grove Street, near the city hall was built at a cost of $17,000, and was dedicated July 17, 1853. The erection of this building was a great achievement at that time. None of the members were wealthy, yet the building was completed, under the leadership of the Reverend William Verrinder, who pastored the church 1849-1854.

At a special meeting called on November 30, 1894, the following action was taken in honor of Rev. Dr. Wheelock Parmly:

Looking for a Now Location

The Parmly Memorial Baptist Church flourished in the late 1800's. With a massive influx of immigrants of other languages and other religions, the city of Jersey City was changing. The city was improving its transit system. The stagecoaches ran from the ferry to the hill section (waterfront to the uptown area), but it was necessary for most to live within walking distance of their jobs or near the ferry to New York. 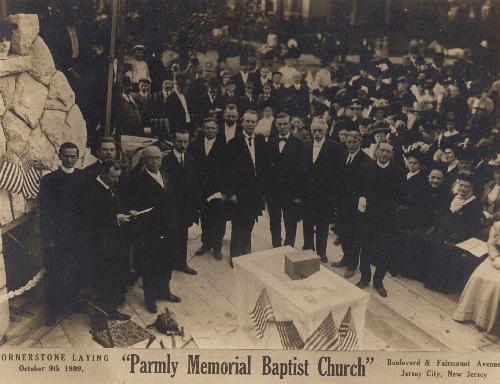 The year was 1909. It was a happy spirit for the Parmly Memorial Baptist Church. The last Sunday in the old building was on December 5, 1909. Many invitations were sent out to friends and former members, who were now living out of the city. Under the pastorate of the Reverend J. Madison Hare, the Church moved into our present building with a new sense of spirit and vision for the 1900's.

The years of 1909-1938, were happy years for the Parmly Memorial Baptist Church. During the centennial celebration the members honored the Reverend J. Madison Hare. Pastor Hare was responsible for leading the church into the new building.

Following the Reverend Hare, was the Reverend B.B. Abbit of Camden, New Jersey. He was installed on October 22, 1914. The Reverend Benjamin Abbit resigned in December 1925, to become Pastor of the First Baptist Church, Hempstead, Long Island. Five months later Dr. M.T. Shelford was called to be the Pastor. His installation was held on June 7, 1926.

Dr. Shelford resigned, and the Reverend Arthur Y. Halter became Pastor during the depression years, November 1, 1931, to May 1, 1934. In 1935, the Church extended a unanimous call to the Reverend C.P. Newton, a Chaplain of the National Guard in the United States with a rank as Lieutenant Colonel.

The centennial year was celebrated for one entire week, November 27 to December 14, 1938 as the Parmly Memorial Baptist Church.

The depression years were difficult for the Church. Members lost jobs and the economic stability of those days were tough, yet "She" struggled to survive. 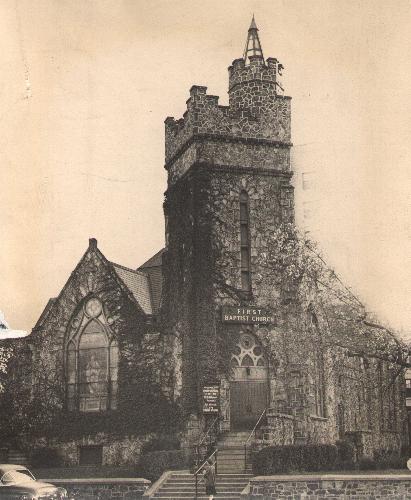 In 1981, the Church called a young Pastor to lead the Church. After over ten years of interim pastors, First Baptist Church experienced a remarkable growth in its social consciousness under the Reverend Darrell Boyd.

7 Ministries to the Haitian community of Jersey City:

The Calling of The Reverend Glenmore Bembry, Jr.

On March 15, 1987, the Pulpit Committee of the First Baptist Church invited The Reverend Glenmore Bembry, Jr. to preach as a candidate for Pastor. He and his wife Michelle came to visit the Church and afterwards the Church met in session and voted unanimously to call its new Pastor. Reverend Bembry assumed the Pastorate on May 1, 1987, and was installed on May 31, 1987.

The Resurgence of First Baptist Church:
The Installation of Reverend Eva C. Foster

With the departure of Reverend Bembry, First Baptist was without permanent leadership for many years. However, after a long tradition of male leadership, First Baptist Church made history on March 1, 1998 by installing its first permanent woman pastor, Reverend Eva C. Foster.

Under Reverend Foster's leadership, First Baptist Church developed a renewed sense of commitment. She brought hope and inspiration to the multi-national congregation. 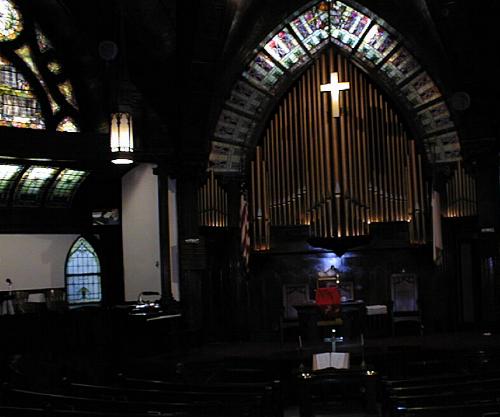 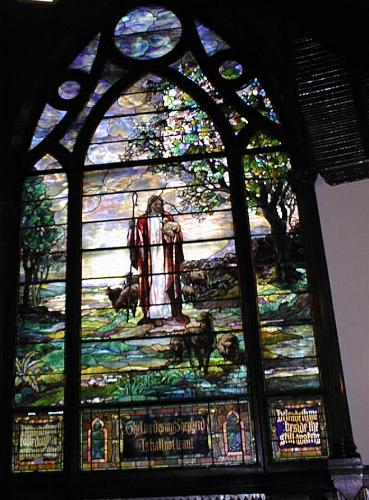 One Of The Beautiful Stained-Glass Windows

The current pastor, Frances Day, was ordained by ABCUSA as Reverend Frances Day on August 23, 2003. On October 19, 2003, Frances Day was installed as the Senior Pastor of First Baptist Church.

The First Baptist Church is a reflection of the cultural differences of our city. A once predominately Anglo Saxon congregation, it is now an "International Church", whose congregation consists of proud African-American, Caribbean, Latino and Filipino families 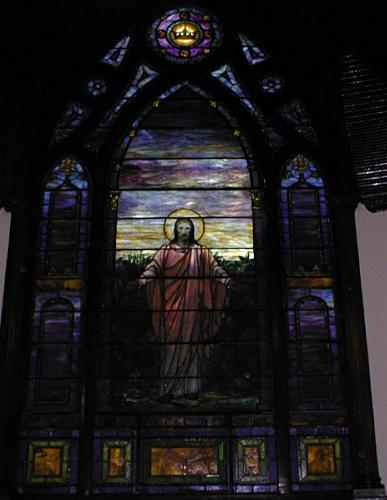 A Jewel For The Eye, The Mind, And The Soul
"Celebrate Our Legacy . . . Face Our Future"